It's Get Sketchy Time! 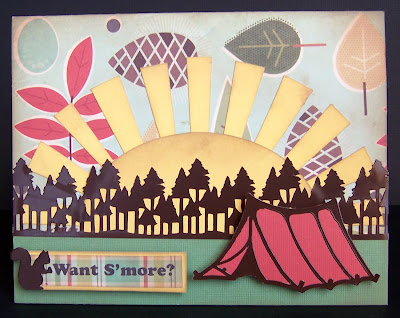 It's Friday, so that means it's time for a new sketch and challenge over at Get Sketchy! This week's sponsor is Hot Off the Press. You may receive their catalog, Paper Wishes, in the mail like I do. I had seen the new Dazzles stickers in the catalog and thought it would be fun to try them. This week, I got that chance!
This week's sketch featured a half-circle with a scalloped border. At first glance, I imagined a frilly, feminine card. Then I saw that the bonus challenge was to make a masculine card. Hmm...I started turning the sketch and thinking about variations that would work with these stickers. After turning the sketch on its side, I pictured a campsite under the moon. After struggling with a moon, I realized that a sunrise would be the more logical choice, and I could substitute the sun rays for the scallops! And that's how this card was born.
First, I covered my card base with patterned paper from the Mr. Campy line by Cosmo Cricket and added a green cardstock strip to the bottom for grass. Next, I cut an oval and "rays" from yellow cardstock. I inked all of the edges, then assembled my sun. The tree border worked perfectly, as it allows the sunlight to peek through, just like a real camping sunrise. The tent is made from one of the Dazzles stickers on rust cardstock. I trimmed around the edge of the sticker and adhered it to my card front with foam squares. Finally, I added a sentiment-which I trimmed from the edge of the Mr. Campy paper! I love it when companies put cute sayings or designs on the edges!
I have been making a lot of cards lately for various challenges and design team assignments. I hope to be able to show them all to you soon! Just be patient... :)
Thanks for stopping by today, and I hope you get a chance to play along with us this week at Get Sketchy!
Posted by Sherri Everett Thompson at 2:04 PM

sweet mother of pearl woman...this is over the top fabbie!!!

All I have to say is: WOW!
This card is super creative. I was actually browsing around in my Google Reader, and my sister walked by and noticed your card right away. We both think it's awesome and so unique. And the sentiment is so cute too!

I love how this Turned out you used those stickers perfectly!!!

This is an awesome card - I am a huge camping person so it immediately caught my eye!!!

HOw cute is this! So fabulous! 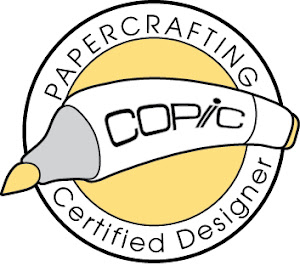